Now that I’ve been able to load an image and play with some colors, I wanted to implement some basic image manipulation functionality: blurring. To handle out-of-bounds errors when back-projecting to the input image, I learned about image overloading, played with the Interpolations.jl package, and generated some really trippy mirror art.

Here is my notebook, annotated with my findings and pretty pictures.

In this notebook I want to play with image manipulation I'm going to implement a blurring function on an input image.

So, to blur an image:

I am also curious to see the effects of different methods on the timing of the entire program. 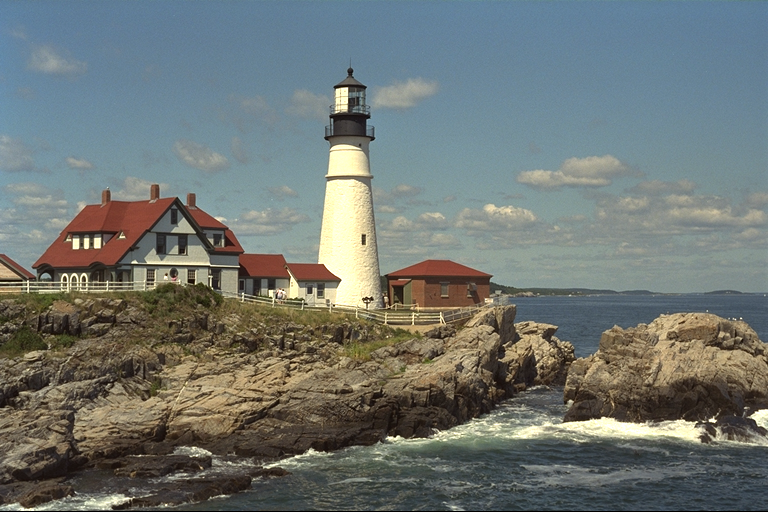 I want to generate a few custom types (like structs in C++ or enum types in Python 3) to make data manipulation a little bit easier.

I tried to make a type called size, but got this error message (I took a screenshot because I didn't actually want to overwrite a new method called size). It looks like there is another method defined in the images packages - actually MANY of them! No matter, I will define a new type with a different name!

An interesting feature of Julia types is that they define default function constructors for a type, hence the output of the methods function above.

In the process of creating a function to generate a kernel in 2 dimensions, I want to generate a 1D gaussian. I can do this with an anonymous function. Even cooler, variable names in Julia can be represented as unicode! As a friend says, "it can lead you to do some really awesome things, and some things you probably should not do." I think using LaTeX symbols in the Julia REPL is quite magical. Certainly easier to represent math!

(To generate unicode as a variable name, type \ followed by the appropriate LaTeX symbol and press tab.)

The function name is \phi. This is the Gaussian function centered at 0, and you specify an input value x and a standard deviation \sigma.

The fact that I can use the Julia dot notation and have it broadcast the function appropriately is magical!

Putting it all together: blurring¶

Now let's put it all together to generate a blurred version of the image using our kernels!

The first thing you need to do is make sure your input image is floats, so you can do proper arithmetic. After much Googling I found that you need to use the convert function from Images.jl. Alternatively, you can use casting. 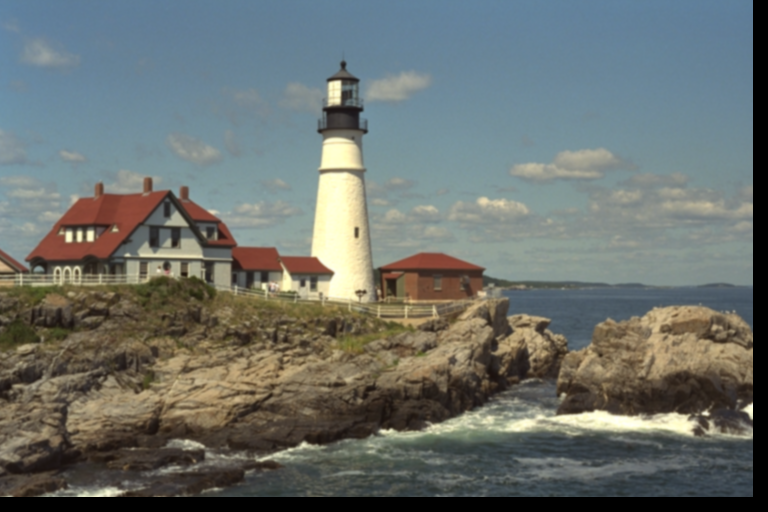 The black pixels on the edges of the image don't have exactly kernel-size matches in the input image, so for now I am just not not computing those pixels. The way I do this is by modifying the for loop to not iterate over the last pixels. The right way to fix this is to implement an "out of bounds" function to access pixels outside the range of an image.

In fact, the Julia Interpolations.jl package already implemented this!

extrapolate(itp, scheme) adds extrapolation behavior to an interpolation object, according to the provided scheme.

The scheme can take any of these values:

You can also combine schemes in tuples. For example, the scheme (Linear(), Flat()) will use linear extrapolation in the first dimension, and constant in the second.

Interestingly enough, the last few rows in the blurred image are black. The reason for this that if you look at the last rows in the original image, it is a fully-black row:

The previous-to-last row is not black. The original image from the TestImages package just has a row of black pixels for some reason.

And while I'm here, I'll just make an InterpImage with my original image.

To overload the getindex function, you need import Base.getindex explicitly. If you don't, the Julia REPL will tell you to do so.

And as a warning, my mod-multiply-add arithmetic to compute the ranges is a little crazy, but it makes this a one-liner!

And as a result, I can mirror-index into my interpolated image. Even with negative indices! Trippy. I call this one, Lighthouseption.

And this one, Lighthouse In The Sky. 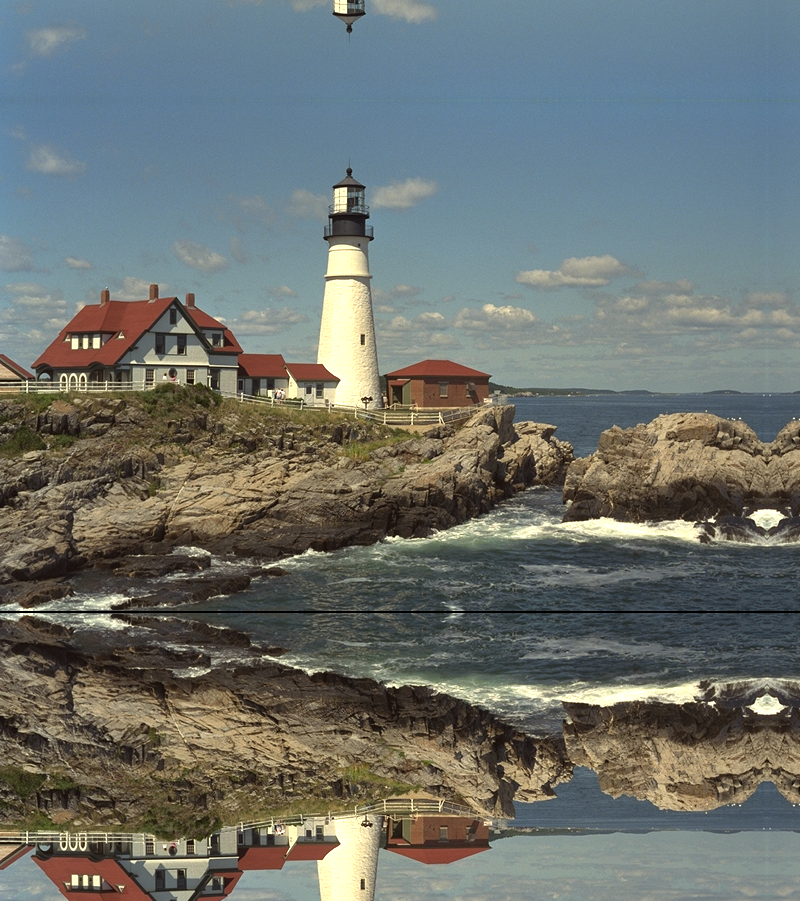 And now we can update our previous blur function to use the mirrored interpolation, if it tries to access a pixel outside the range. The black line at the bottom of the image should go away. 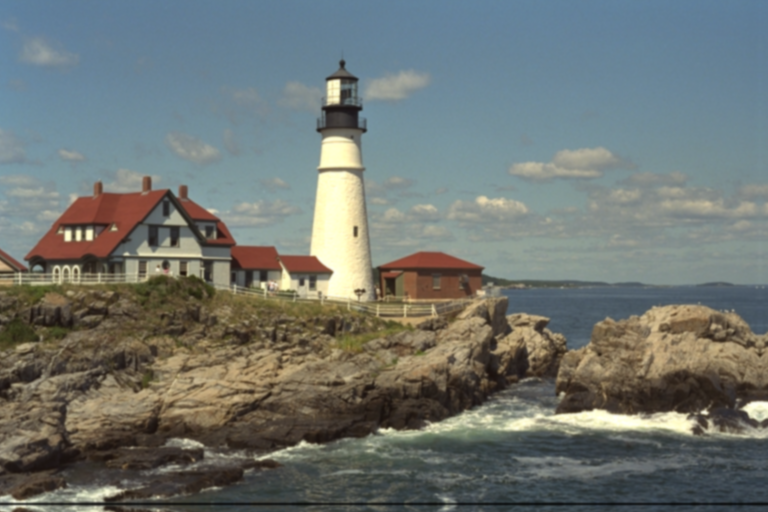 And so it does! The problem with this implementation (that I can't really do anything about, short of writing optimized for loop code), is that because I am not using UnitRange types to access the subsets of the image for my kernel calculations, it is slower than the previous blur implementations. For comparison, all the functions running with kernel size 15:

An aside on broadcasting linear interpolations¶

And Robin showed me how to turn a function call into an index broadcast. I am still wrapping my head around what this means. But basically, the object img_interp, when called as a function with any args..., broadcast those arguments into indexing notation. So when img_interp is called with range arguments like 1:10, it calls each element in the range into index notation. I had to adjust my blurring code to call img_interp as a function, but it works! The right edge of the image looks different than a blur using nearest neighbor interpolation above. 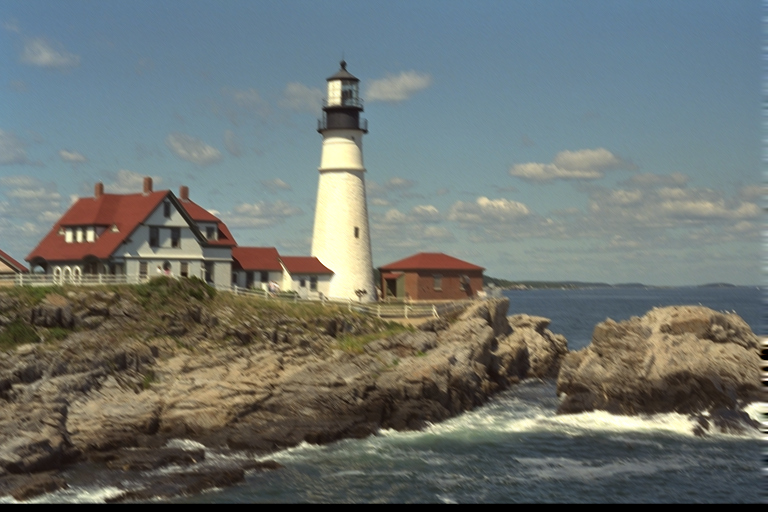 I wanted to share a wrong piece of code and the resulting image with you. I ended up going with a different structure for my final implementation, as you can see from the notebook above, but a question for you: can you find my bug?

Here is the code:

And it produces this output:

Maybe THIS one should be Lighthouseception.

Hint: start and stop indices are difficult to get right.

Any comments for me?