Whereas in my last post I manually wrote a blur kernel and code to convolve an image, I didn’t want to do that every time an image convolution came up. So in this post I learned about the imfilter function from the ImageFiltering.jl package. I also learned about the @time macro and had a small aside on array creation.

I’ve included my notebook here. You can see the original on Github if you like.

In this notebook, I will learn how to run some basic edge detection algorithms from Julia. Given an image, return an edge map. To do this, I want to learn how to do the following:

This is a natural follow-up to my blurring computation from a previous exercise, since the Sobel operator is just a different kind of kernel. But it is also a common kernel needed in image manipulation, so I can compare my implemenation timing to the implementation in the ImageFiltering.jl package. After timing the built-in functions, I won't even try to time my own implemenation...

The test image is going to be of our former president, Barack Obama. 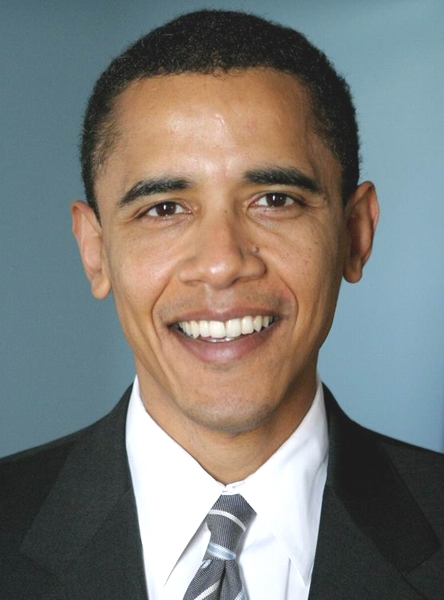 The Sobel kernel should operate on grayscale images, and we can use operator broadcasting to do that: 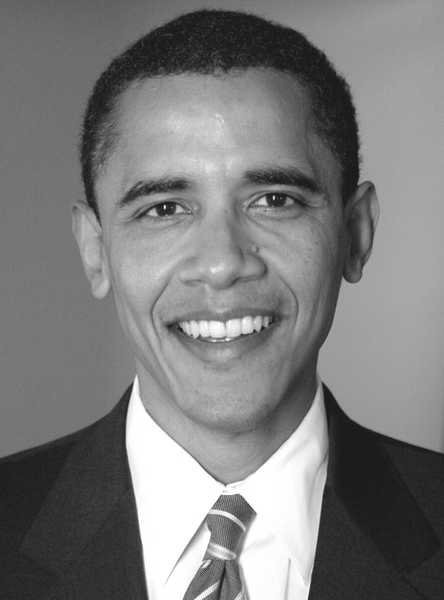 The first thing we'll try doing is manually running a Sobel image kernel on the input image. The Sobel operator is basically an approximation of derivatives in the X and Y directions of the image. The theory is that if there is a high gradient magnitude, there is an edge in that location. The way you compute the Sobel operator is to convolve this kernel:

in the X direction, and

in the Y direction. Note how they are just transposes of each other.

To apply image kernels, I am going to use the imfilter function from JuliaImages: http://juliaimages.github.io/latest/function_reference.html#ImageFiltering.imfilter. Rather than manually trying to implement out-of-bounds implementations or worrying about applying a dot product / convolution, let's just use the builtins.

Another awesome feature of the JuliaImages library is the ability to pad the input according to 4 rules:

Read more here: http://juliaimages.github.io/latest/function_reference.html#Boundaries-and-padding-1. Which you can specify by doing something like:

In my case, I will just use the "replicate" mode.

There are a few things to note about the imfilter function:

What you can see from the image after the Sobel kernel is applied in the x and y directions is that there is a lot of noise all over the image - this is because the kernel is only looking at neighborhoods of 3x3. To get around this, we can just take the magnitude of the gradient, or even the 4th power of the gradient. 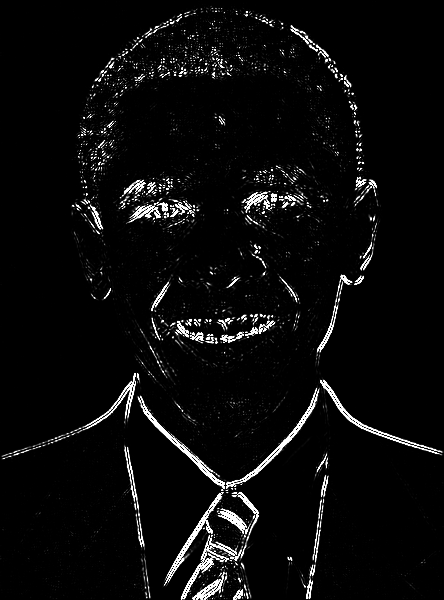 As you can see, much less noise.

However, using some interesting properties of the Sobel convolution operation, we can do even better. The Sobel kernel is separable - we can compute the full 3x3 kernel as a multiplication of a 1x3 and 3x1 kernels.

The kernels above ($K_x$ and $K_y$) can each be factored into two 1-dimensional kernels:

So we can pass these 4 smaller kernels into imfilter() to get the same result: 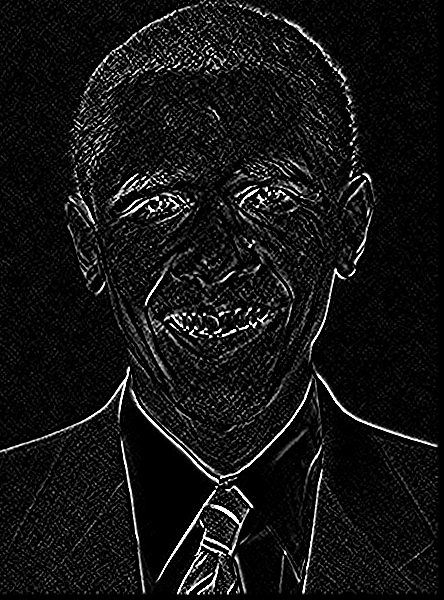 Note the only difference is that the boundaries of the image are pure black. This is probably because of the kernel size - the kernel that is 3x1 needs only pixels horizontally, not vertically, so the "replication" step of the imfilter code replicates the default value, which is black.

We can do even one better than manually factorizong kernels. We can use a feature built into the imfilter library to automatically factor the kernel itself before calling the imfilter function. You can see a detailed example of how to use it here: http://juliaimages.github.io/latest/imagefiltering.html#Factored-kernels-1. 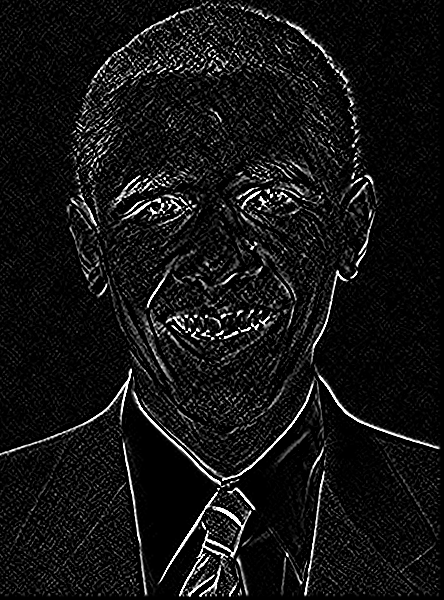 In fact, the imfilter() function implementation automatically tries to factorize the kernels when it is called: https://github.com/JuliaImages/ImageFiltering.jl/blob/master/src/imfilter.jl#L10, so you don't have to remember to get this functionality for free.

There is one more way to apply Sobel kernels to the image. Of course, imfilter() has a Sobel kernel built in. and it's even automatically separable. The difference as you can see with the built-in sobel kernel is that it is normalized - the kernel is divided by the sum of the kernel (which in this case is 8), so the sum of all the factors in the kernel is equal to 1. This is a common technique in computer vision and image processing, but for visualizing the results here, we will multiply the output by 64 to get the same output image as above (8 for each kernel, and there are 2 kernels in the sobel kernel). 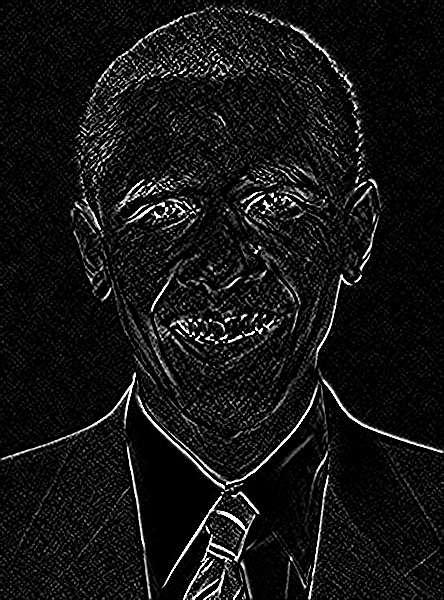 The notable lack of OpenCV¶

When I first started out on this learning, I thought Opencv.jl would have a wrapper around all the functions available in the OpenCV library. However, the Opencv.jl library is not mature, and is only a manual wrapper around functions available in Opencv. The Sobel kernel is not one of the available functions, so I didn't get a chance to test it! Notably, one of the issues in the Opencv.jl package is to automatically wrap all the Opencv functions: https://github.com/JuliaOpenCV/OpenCV.jl/issues/7. I can't wait!

Now let's compare the timings of all the methods. The Julia documentation talks about timing code regularly with the @time macro, and using that to guide development: http://docs.julialang.org/en/stable/manual/performance-tips/#measure-performance-with-time-and-pay-attention-to-memory-allocation. The most important thing to note about the @time macro is that first time it is called will also time all the compilation time needed for any code that is being timed AND code that actually will be timed. So to get an accurate reading, you should call @time twice. It also tells you how much memory is allocated.

Sometimes the output of @time will say something like 40.71% gc time - this means that 40% of the time is spent garbage-collecting unused variables and freeing memory. So you can either ignore those runs or ignore that amount of time in your final analysis.

We want to time all these runs:

Based on the timing results, we can see that manually trying to factor yields the WORST results! Julia does a lot of the heavy lifting behind-the-scenes with function inlining and compiling. For the kernel that is built-in, like the Sobel kernel (https://github.com/JuliaImages/ImageFiltering.jl/blob/master/src/kernelfactors.jl#L151), you can actually see that the factors are hand-coded, so it will naturally be faster.

But you never know if this will be true in general! So from what I can tell, the @time macro is critical for development.

I originally intended this exploration to be USING the image gradient rather than all about computing it, but instead it turned into an explanation of @time and a divergence into array notation (see below), so next time I will actually use the image gradient to do some fun image manipulation!

An aside on array notation¶

The major learning from this post was actually about how array notation works in Julia. When I was first trying to get the kernel factoring calls working, I was having a problem with a particular error: 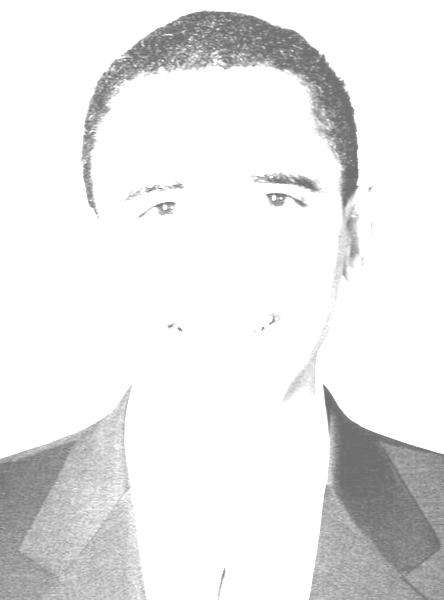 I couldn't figure out what was happening. But what I realized was that the actual type that was returned when the kernel array was created was different. Take a look:

I actually thought this was inconsistent and filed an issue on the Julia issue tracker: https://github.com/JuliaLang/julia/issues/20957. But it turns out I was obviously not the first one to notice this or report it. In fact, there is a whole thread on the Julia Discourse forums that I am now following: https://discourse.julialang.org/t/whats-the-meaning-of-the-array-syntax/938, and would be interested in learning how it gets fixed. I will be following this issue closely as the language evolves!

I think consistency would go a long way to making newbies not confused with new syntax. In any case, I learned something new.

I suspect there will be a lot from the ImageFiltering.jl package in my future… it implements nice things like smart image padding, kernel factorization, and smart filtering. And the package author is active on Github, answering questions and closing issues as needed.

Thank you for reading, as usual! I would love to hear from you if you have any suggestions, comments, or ideas for what I should learn next.